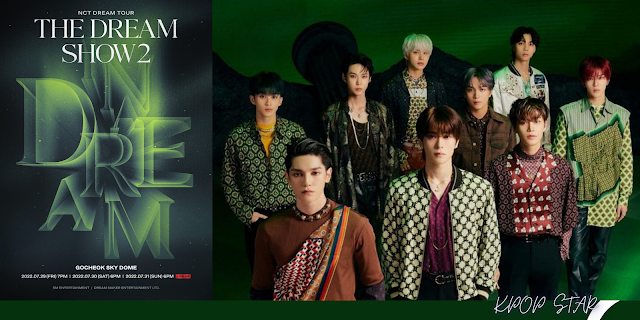 This shows his popularity by successfully selling concert tickets for three consecutive days at Gocheok Sky Dome in a short period of time.

Shortly after opening the ticket pre-sale, Yes24 issued an apology because their website server had problems due to too many users trying to access their website at the same time.

The concert, which will be held for three consecutive days at the Gocheok Sky Dome, has successfully attracted high enthusiasm from fans since they officially announced that they would hold the concert.

Yes24 even mentioned that around 1.5 million users tried to enter their website to get tickets for this NCT Dream concert. They even issued an official statement and apologized, and promised to do better service for the next ticket sale.

On July 1, 2022, ticket sales for the general public finally reopened at 20:00 KST, and again received an overwhelming response from NCT Dream fans.

In just a short time, the concert tickets for three consecutive days were sold out. Meanwhile, online ticket sales for Beyond Live broadcasts on July 31, 2022 will only open on July 11, 2022.

Fans who didn't manage to get physical tickets for the concert from 29-31 July 2022, will still have the opportunity to watch the 'The Dream Show 2: In A Dream' concert online. Online concert tickets usually will not be limited by the number of users.

The concert 'The Dream Show 2: In A Dream' will be attended by seven NCT Dream members in full, that's why fans are so enthusiastic to see the seven members' stage action on stage after a long time.

NCT Dream itself this year has made 2 comebacks this year through their second full album titled 'Glitch Mode' on March 28, 2022, and the repackage album 'Beatbox' on May 30, 2022, and successfully won the triple million seller title with the second total sales. album reached 3.61 million copies, proving their high popularity.