On May 11 2018, Jang Won Young or Wonyoung was announced to officially participate in the Produce48 event by representing Starship Entertainment.

Then on August 30 2018, she won the competition by taking first place. She officially debuted with IZ*ONE on October 29, 2018 with the album Color*IZ.

However, on April 29, 2021, her contract with IZ*ONE ended and she returned to being a trainee at Starship Entertainment.

In September 2021, she was chosen to be the new Host on Music Bank with ENHYPEN's Sunghoon. Both officially replace Arin and Soobin.

Together with Yujin, she became a new member in the group called IVE which was announced by Starship Entertainment in November 2021. Her official debut with IVE was on December 1, 2021 with a single titled Eleven. 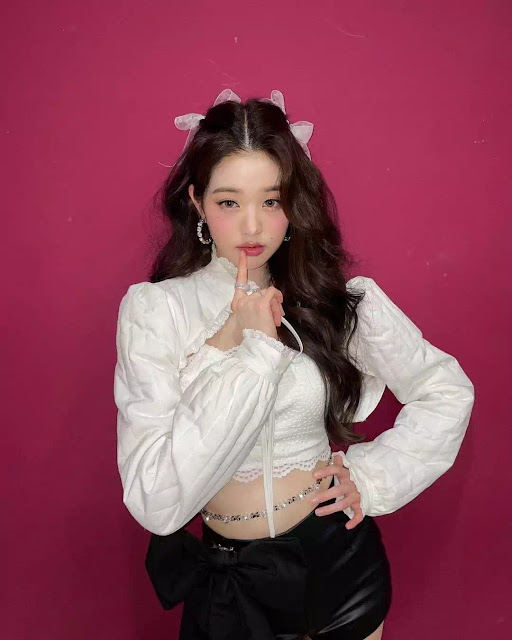 Wonyoung is a former member of IZ*ONE who is now debuting as one of the vocalists of the group IVE.

Wonyoung was born and raised in Seoul.

Her family members consist of father, mother, and an older sister (born 2001).

Jang Wonyoung is one of the most popular trainees on the 'Produce 48' program, she always tops the rankings. She even ranked first in the final night of the event.

She was recruited by the Starship staff when she was in the 1st grade of middle school.

Prior to competing on 'Produce 48', she had been a trainee in Starship for 1 year 2 months.

Before debut, Wonyoung had appeared in the YDPP MV entitled 'LOVE IT LIVE IT'.

When in IZ*ONE, her position is center and visual.

According to fans who have met Wonyoung in person, she is more beautiful than seen on the TV.

You could say that Wonyoung is one of the most popular members of IZ*ONE.

After being active with IZ*ONE, she starred in several commercials including MiuMiu, Laura Mercier, and Innisfree.

She has a cheerful, friendly, and easy-going personality,

As the maknae in IZ*ONE, she is known to have a lot of aegyo.

Despite her young age, she has a slim body and model-like proportions.

Her motto is "Don't regret what happened".

During fansign events, she often asks fans if they have eaten.

According to fellow IZ*ONE Kang Hye Won, Wonyoung has a neat and clean room.

She likes the quiet atmosphere.

One of her favorite foods is beef.

She said that his way to relieve stress was to eat late night snacks.

She likes rabbits and dogs.

She is the type of person who pays attention to appearance for airport fashion.

Her favorite clothes are dresses and denim.

She prefers black hair color, because of that she rarely dyes his hair.

Her favorite dramas are 'My Love from the Star', 'Legend of the Blue Sea', 'Reply' Series, and 'Boys Over Flowers'.

Wonyoung said that she is the type of person who doesn't gain weight easily.

When she was a child, Wonyoung had prepared herself to enter an art school.

She had talents in language and mathematics when she was still in school.

According to fans, Wonyoung has a face that looks like a rabbit.

She opened her personal Instagram on May 24, 2021 and managed to get 1 million followers within three weeks.

She is proficient in English and Japanese.

When she was a child, she had won a national level drawing competition.

She is afraid of cockroaches.

As a child, her family raised a dog named Charcoal.

The first tourist spot she visited was Jeju Island.

Since September 2021, Wonyoung has been MCing Music Bank with ENHYPEN's Sunghoon.

Besides having stunning visuals, Wonyoung IVE is also talented from singing, dancing, and even Host a show.