Lee Hyun Seo or Leeseo started her career in the entertainment world by debuting with a group called IVE on December 1, 2021.
She and other members of the group made by Starship Entertainment brought a single entitled Eleven.
The agency announced Liz as the last IVE member on November 7, 2021.
She went training for about two years at the agency. However, she is actually a former trainee for a model at SM Entertainment. 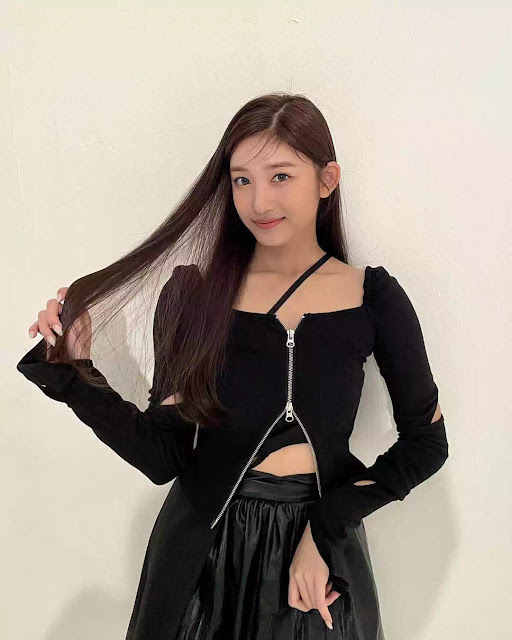 Leeseo is the vocalist and maknae of the girl group IVE.
Her signature color is blue, while the word that represents it is “SPARK”.
She was born and raised in Seoul.
Her family members consist of father, mother and younger sister.
She is a former first generation trainee model at SM Entertainment.
In 2019, when she was in the 6th grade elementary school, she was offered to be a trainee by Starship when she was walking around the Shinsegae Department Store to buy drinks.
People who have met Leeseo think that she looks like a mixed-European blood (bloodline).
Many think that Leeseo is similar to Nancy Momoland.
She was the last member of IVE to be introduced to the public.
Until 2021, Leeseo became the youngest girl group member in the K-Pop music industry.
She attended Bangbae Middle School.
Leeseo is the only IVE member who is still in middle school.
The MBTI is ENFP.
Leeseo is adorable, active, and energetic.
According to her teammate Wonyoung, Leeseo is very good at aegyo.
Her favorite clothes are uniforms.
Her favorite season is winter.
Leeseo is not someone who is picky when it comes to food, she can eat any food.
She likes mint-choco.
She's good at making french toast.
Many fans think that Leeseo's face is similar to Gaeul's.
Due to being a minor, Leeseo could not perform with IVE past 22:00.
Gaeul, the oldest member of IVE, felt a generational difference when Leeseo admitted that she didn't know the dramas 'Boys Over Flowers' and 'Dream High'.
She said that one day she wanted people to exclaim “Wow, that's Leeseo” just by hearing her voice.
She fell asleep easily, anywhere and anytime.
According to Gaeul, Leeseo often delirious while sleeping.
She has big palms.
She had never pierced her ears before debut.
Leeseo named Jennie BLACKPINK as her role model.
When asked what advertisement she would like to star in, Leeseo chose an ice cream product advertisement.
Leeseo's nicknames are Baby Leeseo, Vitamin, Baby Tiger, Princess Leeseo, Maknaeng-i, etc.
Even though she is still studying, Leeseo able to show the public that she is a person talented as an idol.