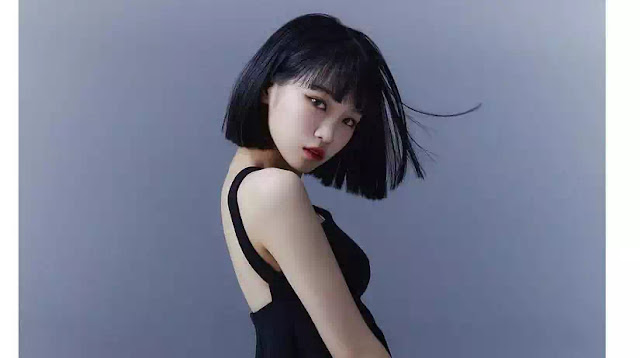 Kim Chaewon's mother is an artist

Kim Chaewon was born in Seoul on August 1, 2000 so she is currently 21 years old or 22 years old according to Korean calculations. She is the daughter of Lee Ran Hee, a famous theater artist in South Korea.
Kim Chaewon is known to be a graduate of Seoul Poi Elementary School, Guryong Middle School, and Hanlim Arts High School.
When she was in the elementary school, Kim Chaewon had time to take part in the Korea Children's Song Contest held by KBS in 2012.

Kim Chaewon has plunged into the world of entertainment since she was in elementary school. She likes singing and dancing and dreams of becoming a KPOP Idol. Then her dream to become a Kpop idol appeared when she was in high school.
She had auditioned several times at various agencies but always failed. Finally, Kim Chaewon was recruited to be a trainee at Woollim Entertainment in 2018. Having only been training for 11 months, she tried his luck by participating in the survival show made by Mnet, Produce 48.

Kim Chaewon as a member of IZ*ONE

Kim Chaewon finally competed in Produce 48 with three other Woollim Entertainment trainees, namely Kwon Eun Bi, Kim Su Yun, and Kim So Hee.
At that time, she was known to have a unique voice and sharp dance moves. Even though she is a quiet person, her talent always manages to amaze her mentors.
In the final of Produce 48, Kim Chaewon ranked 10th by getting 238,192 votes from global fans. With this, she made it into the debut line-up for the girl group that dropped out of the survival show named IZ*ONE.
IZ*ONE officially debuted on October 29, 2018 with the release of their first album COLOR*IZ and the title track song La Vie en Rose. After two years of promotions, IZ*ONE disbanded on April 29, 2021.

Shortly after IZ*ONE disbanded, Kim Chaewon decided to leave Woolim Entertainment. Then in August 2021, rumors emerged that Source Music would be debuting a new girl group. At that time, Chaewon allegedly entered the line up.
It turns out that speculation is true. Kim Chaewon moved to Source Music in early 2022. She is part of the new girl group LE SSERAFIM which is scheduled debuted in May 2022,
Since Source Music had been acquired by HYBE, Bang Si Hyuk stepped in to produce LE SSERAFIM. As the founding founder of HYBE, Bang Si Hyuk became the main producer that debuted BTS and TXT under the agency BigHit Music (formerly BigHit Entertainment), as well as ENHYPEN under the affiliate label BELIFT LAB.
LE SSERAFIM itself is an anagram of 'IM FEARLESS' or means 'I'm not afraid'. Besides Kim Chaewon, former IZ*ONE member Miyawaki Sakura has also been confirmed to join LE SSERAFIM.

Those are facts, career path, family, complete profile and biodata of Kim Chaewon LE SSERAFIM. The former IZ*ONE member is scheduled to debut for the second time in May 2022 with Miyawaki Sakura, Kim Garam, Hong Eunchae, Kazuha, and Huh Yunjin as Source Music's new girl group.