Jungwon was first introduced as a contestant through the survival show CJ ENM and Big Hit Entertainment I-LAND. Where Jungwon was introduced on June 2, 2020.
For his ability to dance and sing, Jungwon managed to get first place with 1,417,620 votes on the tv show. Therefore, Jungwoon became a member of the ENHYPEN group. 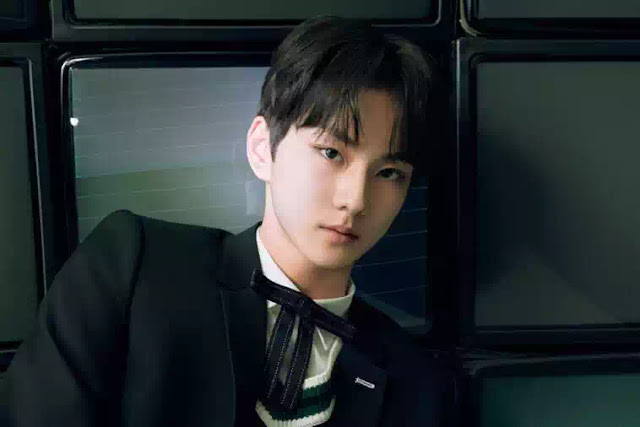 Trainee for 1 year, 4 months.
He performed All I Wanna Do Jay Park in the first episode of I-LAND with the two eliminated contestants, Yoonwon and Taeyong.
His favorite memory from I-LAND is watching Jay sleep with his eyes open one night.
The other members thought he was cute when they first met him.
The shortest member.
Jungwon fandom name created by fans is Edens
Sign in to Belift Lab agency.
One room with Sunghoon, Sunoo and NI-KI.
Has a habit of lowering his sleeves, wagging his eyebrows up and placing his palms facing up while sitting.
Jungwon's favorite colors are blue and orange.
His favorite season is winter.
He was popping in his sleep.
Can imitate the sound of Squidward's footsteps.
Has a pet dog named Maeumi, who was named after the dog in the drama Heart Is.
According to Ni-ki, he and Sunoo snore the most.
Former SM Entertainment (2017-2018) and BigHit Entertainment (2018-2019) trainees.
His role model is Jungkook BTS.
Jungwon's charm is captivating in many ways.
His special skill is copying the sound of Squidward's footsteps.
His specialty is singing, dancing, popping, and taekwondo.
Jungwon did Taekwondo for 7 years and was an athlete for 4 years.
Charming Point is Dimples, cute personality, smile eyes, shoulders.
Choose his nose as his charm.
The shoulder length is 48cm.
Likes is Jake, all the members, taking off his socks, curry and ENHYPEN.
What he doesn't like is lying in bed with socks on and chewing food hard.
Her favorite ice cream flavor is Mom is an Alien.
His most valuable object is the backpack he's been using since fifth grade
Used to not understand why idols feel energized by fans. He realized why after getting a fan video for himself
My favorite subject at school is math.
Wanted to take a selca with fans after debut.
Wanted to visit Canada to see the aurora.
If he could have super powers, he would be able to make everything he said come true
Want to be someone that other people think is cool and awesome
If he had to choose three words to describe himself, he would choose adaptability, balance and absorption.
His lifelong goal is to be handsome
Hope he will have a successful debut and grow taller by the end of 2020
She used to have curly hair but she didn't like it so she straightened it straight away.
Shared his birthday with Chungha and Johnny NCT.
Has no motto.