Jeon Somi is a female singer of mixed blood from South Korea and Canada. She was born in Ontario, Canada with the birth name Ennik Somi Douma.
She has Canadian-Dutch blood from her father, while her mother is South Korean descent. She has a younger sister named Evelyn Douma who is 8 years younger than her.
She is known after participating in two popular survival programs, Sixteen and Produce 101. In the Sixteen program, she has not succeeded becoming a member of the girl group from the survival program.
She was eliminated right in the final round, while the new group formed from the program is now known as TWICE.
In 2016, she returned to the Mnet program Produce 101. In this program, she won first place with 858,333 votes.
Finally she debuted with 10 other winners under the group name I.O.I. They debuted on May 4, 2016 with the release of a mini album titled 'Chrysalis' under the YMC Entertainment agency.
Unfortunately, I.O.I officially disbanded according to the contract at the end of January 2017. Then in early 2017, she officially signed a contract with JYP Entertainment.
Furthermore, she participated in many television programs, one of which was the Sister's Slam Dunk 2 program on the KBS2 station.
She has also carried out several collaborative projects with well-known singers such as Eric Nam and Jun. K.
However, on August 20, 2018, JYP announced that she had terminated her contract with them. A few months later Somi confirmed that she had now joined The Black Label.
On February 25, 2019, The Black Label announced that she was making his official solo debut on June 13, 2019. She released a single which was produced by Teddy Park. 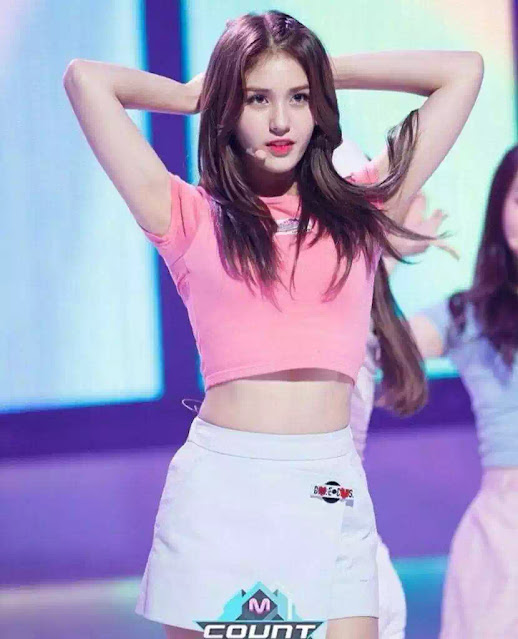 Born in Canada, she moved to Korea with her parents when she was 1 year old.
During the audition, she sang 2NE1's song 'Lonely'.
When she was in I.O.I, she was the center and the maknae.
Her specialties are taekwondo, drawing caricatures, and cooking.
She underwent a trainee period for 2 years.
Has a cat named 'Cheese' and 'Cookie'.
When she was still at school, she was bullied because her face was not Asian.
She is a fan of 2NE1, EXO's Kai, Bigbang and GOT7's JB.
In 2014 she appeared on the program Hello Counselor episode 187 with her mother and grandmother.
Her father made a cameo appearance in the drama Descendants of The Sun.
Her close idol friends are GFriend's Umji, CLC's Eunbin, ex-Wanna One's Daehwi and Woojin and actress Kim Sae Ron.
She was MC Music Bank in Berlin with Park Bogum.
She has also been an MC for Produce 48 with Kang Daniel as the winner of the previous season.
She turned out to be friends with BLACKPINK members.
She gets scared easily when go to haunted places.
Her favorite hairstyle is long hair.
One of her childhood dreams was to become a flight attendant.
She had good vocals even when she was only 15 years old.

Even though she hasn't made her official debut yet, Somi already has many fans because of her abilities from singing, acting to modeling.