Starting from the reality survival show CJ ENM and Big Hit Entertainment called I-LAND, Jake's name began to enter the ranks of singers. He was announced to be a contestant on June 1, 2020.
He joined the idol group ENHYPEN after being ranked third based on global votes. Jake got a total of 1,179,633 votes and debuted on November 30, 2020. 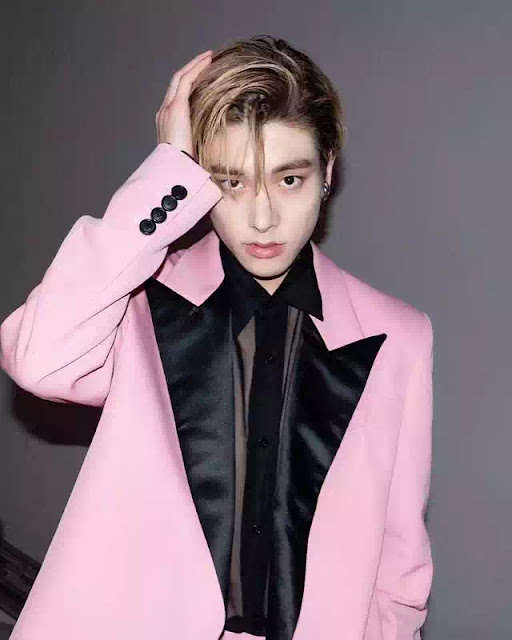 Born in South Korea but raised in Australia since he was nine years old.
He and Sunoo performed TXT's Crown in the first episode of I-LAND with the eliminated contestant, Youngbin.
The other members thought he was very handsome when they first met him.
Is a cute but awkward person.
Wanted to collaborate with Drake.
Good at exercising.
Played the violin for 4 years and was part of his school orchestra.
Can imitate a dog and control the pitch of his voice at will.
Her charming point is the corner of her lips.
Singing Justin Bieber's Love Yourself during his audition.
Love the grape flavored soda.
His favorite colors are black and ivory.
His favorite season is spring.
Her favorite ice cream flavor is My Mom is an Alien (chocolate).
Wants to get #1 on Billboard charts after debut.
Want to be someone who gives positive energy to others.
Hope he will be able to take the other members shopping with him at the end of 2020 and have a successful debut.
If he had to choose three words to describe himself, he would choose passion, perseverance and love.
Sharing birthday with Hyunjin LOONA and Hyogyeong ARIAZ among others
Trainee for 9 months.
Been a soccer player for a while and his position was striker.
Jakeys is the name of Jake's fandom created by fans.
Including smart students and he used to be in the smartest math class.
His favorite school subject is Physics.
According to a former classmate in Australia, Jake comes from a wealthy family.
Jake's favorite colors are black and ivory.
Love puppies/dogs.
His special skills are at work.
Play the violin very good.
Has a dog named Layla, a cream colored border collie and was born on October 31, 2017.
Jake's dog, Layla, is named after an Eric Clapton song called Layla.
Ranked 45th in TC Candler's Most Handsome Faces of 2020.
His specialty is the impression of a dog and controlling the pitch of his voice.
The Interesting Point is Daengdaengmi, meowmeow (love dogs), clumsy, cute.
Likes is Leila, clothes, hip-hop, Sunghoon, all the members.
He doesn't like anything.
Jake, Sunghoon and Jay formed 02z (member of enhypen born in 2002).
His motto is Live with positive vibes and work hard & play hard.