Girl-I-DLE or (G)I-DLE is a South Korean girl group formed by CUBE Entertainment in 2018.
This group originally have 6 members, Mi Yeon, Minnie, Soojin, So Yeon, Yuqi and Shuhua. However, on August 14, 2021, Soojin decided to leave (G)I-DLE.
(G)I-DLE debuted their first mini album I Am on May 2 2018, with the title song Latata and then returned with their debut single titled Hann (Alone) on August 14, 2018.
The song that (G)I-DLE brought, managed to top several Korean charts and successfully brought 3 trophies on the weekly music stage, namely Show Champion, The Show and M! Countdown.
Their first trophy was won on May 22 2018, on The Show stage and by winning the trophy, they became the second fastest group to get a trophy on the weekly music stage after debut.
On February 26, 2019, (G)I-DLE re-released the second album entitled I Made which contains 5 songs and the main song is Senorita. As well as being busy with the annual KCON convention in America and a music festival at the Javits Center.
At the end of the year, we also had a chance to stop by Jakarta for the Spotify On Stage event, on October 4, 2019, which continued with a world tour titled I-Land: Who Am I starting on January 28, 2020.
The third album under the title I Trust with Oh My God as the lead single was released on April 6, 2020. Along with signing a contract with Republic Records to reach the US market.
While his first single album titled Dumdi Dumdi was released on August 3 with the same single name.
In January 2021, (G)I-DLE decided to make a comeback with the fourth mini album entitled I Burn with the single Hwaa. Do not stop, on April 29, 2021 released the song Last Dance with Universe.
After that, the solo member project has been worked on. Ada Yuqi with her debut single A Page, which was released on May 13, 2021. And Soyeon released her first solo mini album Windy on July 5, 2021.
But sadly on August 14, 2021, Cube Entertainment announced that Soojin was leaving the group. But (G)I-DLE continues to work with five members.

She studied at Chung-Ang University.
Inspired to become an artist from Big Bang.
Known before being in (G)I-DLE, because of her skill in creating instruments.
Participated in the Produce 101 season 1 program and she was in 10th place in episode 5, but she failed to debut with IOI because in the last round she was in 20th place.
She also participated in Unpretty Rapstar 3 in 2016 and placed 3rd.
Had a solo debut on November 5, 2017 with the song Jelly, the song was written, composed and arranged by herself.
A talented singer, she was once praised for her voice while recording for a mission in WW10.
Former YG Entertainment trainee.
Signed contract with CUBE around December 2016.
Introduced for the first time in CUBE TREE.
Love watching anime, and her favorite anime is One Piece.
Love the tangerines, corn and mint chocolate.
Doesn't like eating vegetables.
Her favorite color is yellow.
She had homeschooled as a child.
As a child she dreamed of becoming a ninja, because she watched Naruto and wanted to be a pirate.
She took part in composing the album I Am and also contributed to the lyrics, composing and arranging of Hann's single.
So Yeon and Mi Yeon are roommates.

Studying at Wattana Wittaya Academy.
Was a model for Rising Star Cosmetics.
Has appeared in Pentagon Maker.
Participated in Line Friends Dance Party.
Be friends with Sorn CLC and Lisa Blackpink who are also from Thailand.
Able to speak Korean, Thai and English.
Her favorite drink is green tea.
Fans said she was so cute when CUBE TREE first introduced her, on March 23, 2016.
The last member to be introduced as the (G)I-DLE group.
The biggest challenge when she first arrived in Korea was language.
What she wants in the future is that she wants to be known to the world as a representative of Thailand.
She's left-handed.
Her favorite color is pink.
Minnie, Mi Yeon, So Yeon and Yuqi are roommates.

Studying at Beijing 101 High School.
Able to speak English, Korean and Chinese.
She is a Rising Star Cosmetics model.
Auditioned for CUBE in October 2014.
Introduced CUBE TREE on 23 August 2017.
Yuqi and Mi Yeon were introduced as members of (G)I-DLE on April 8, 2018.
Her favorite foods are pickled radish, meat, and jokbal (pork leg).
Was the leader of the Street Dance Club in high school.
Has appeared in a promotional video at Rising Legends CUBE x SOOMPI.
She felt that she didn't have any friends when she first came to Korea
In the future, she wants to be like her role model, Victoria (Fx).
Likes KPOP since middle school, she likes the Girl Crush concept.
Loved watching Running Man, before coming to Korea.
Super Junior fan and her bias is Ryeo Wook.
Nominated for Most 100 Beautiful Faces of 2018, representative from China.
Yuqi and Minnie are roommates.

Studying at Hwa Kang Arts School.
One of the Rising Star Cosmetics models.
Able to speak Chinese and Korean.
Her favorite food is chocolate.
Don't like strawberries.
Has appeared in a promotional video at Rising Legends CUBE x SOOMPI.
Once appeared with Yoo Seon Ho in 10cm's PET video.
Once claimed to want to be like HyunA.
Shuhua and Soojin were introduced as members of (G)I-DLE on April 10, 2018.
Know about kpop from her friends.
The problem that Shuhua experienced when he was a trainee was that he didn't understand Korean.
Want to be a superstar.
Entered CUBE in 2016.
Auditioned for CUBE in Taiwan in 2016.
When she was a trainee, he was alone when he was sad.
She wants to travel when he grows up.
Shuhua and Soojin were roommates, but now they had their own rooms. 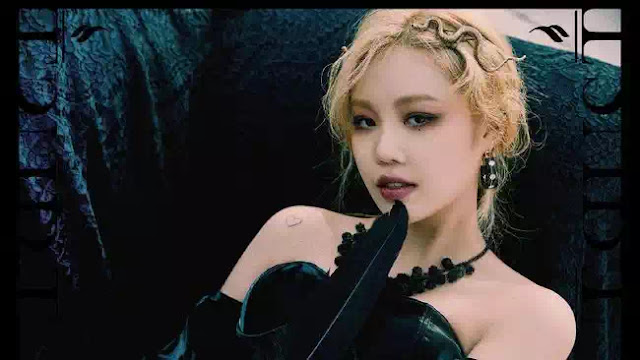 She studied at Korea Arts High School.
Shas studied Jazz Dance since he was a child.
She took ballet classes.
Already followed casting when she was 3 years old.
Introduced CUBE TREE in September 2017.
Soojin and Shuhua were introduced as members of (G)I-DLE on April 10, 2018.
Soojin is the “Mother” in the group, because she is the most considerate of all the members.
The most shy personnel.
Actually Soojin's father didn't want her to be an idol, but she tried to convince her father for 2 years, until her father finally supported him.
Has appeared in So Yeon's MV entitled Jelly and Idle Song.
She once debuted with the group VIVIDIVA in 2015, but the group disbanded in 2016 and even performed once with them on N.NA.
On August 2, 2018, CUBE confirmed that Pentagon's Soojin and Hui were in a relationship, but they broke up.
Soojin and Shuhua are roommates, but now they have their own rooms.
Not only famous in South Korea but also famous in various countries, even spread its wings to the United States. Although now the members are reduced, it still doesn't reduce their cohesiveness as an idol group.